Who reads construction blog posts anyway? Probably people who like to build models of traditional roof framing problems for fun. L’Art du Trait is a form of stereotomical drafting technique developed by French carpenters while framing monestaries in the 14th century. It is essentially a form of applied geometry and considered rudimentary to training any apprentice carpenter. Why has no one ever heard of this in the US, and yet there are abundant resources in French and German? The Swiss took the top 3 places in the 1996 European Carpentry Competition held in Friedrichschafen using their “Rabattement de Surface” method, based on these traditional drafting techniques. 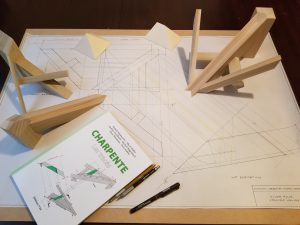